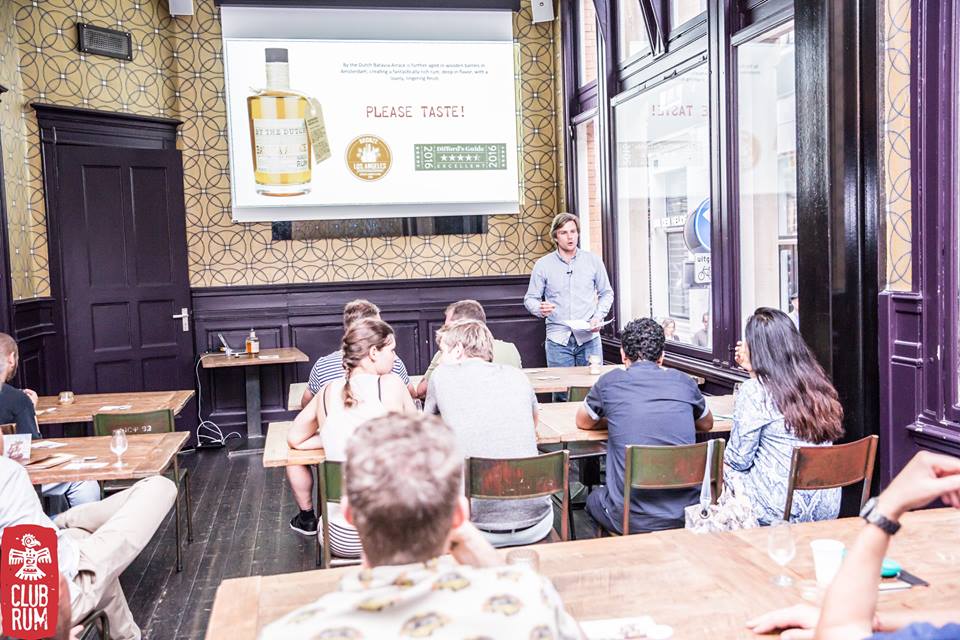 Perola: Before working in the spirits industry, you have studied law and worked as an attorney. How did you find your way from there to By the Dutch?

Jos: In 2009, while I was a law student in Amsterdam, I created a business by selling wine on the Internet, in order to support myself financially. From the year 2010 I started to import wine, selling in The Netherlands to companies, wholesalers and consumers. Just before graduating I started an internship at an international law firm and after my second internship, I decided to sign a long-term contract. After working for the lawyer-company for one year, I decided to become an entrepreneur. I thought that it will be more exciting than being a lawyer. Therefore, I quit my job in 2012 and sold the wine-websites a few years later (2015). By the time, I have been specializing myself towards the Nordic market. In these countries the distribution of alcoholic beverages like beer, wine and spirits is controlled by the government, which means you need to win public tenders in order to be present in liquor stores. While working with the Nordic countries on a daily basis, I realized that the spirits and liqueurs made in the Netherlands, were forgotten by international markets. By the Dutch was founded! I have launched the brand with the idea to advocate professionals and educate consumers about the long History of Dutch spirits or spirits with a Dutch heritage.

Perola: Nowadays By the Dutch consists of an old Genever, a Batavia Arrack rum, a Dry Gin and Cocktail Bitters. Was it your ambition from the beginning to become a multi-spirit company? Have you never thought about doing only Genever?

Jos: No. From the beginning on, I wanted to release different spirits with a Dutch heritage. I already had the Batavia Arrack in mind when I launched the Old Genever back in September 2015.

Perola: Looking at your label, we can understand right away the importance of education for By the Dutch. What is the feedback from customers and professionals? How do they perceive it?

Jos: The feedback is excellent! By looking at the label, the consumer can immediately see what type of product it’s, where the product is made, the origin of the product, who made it and so on. It is an easy and transparent way to communicate with the consumer. When they buy the product, they bring it home and read it over again and share knowledge with friends and family. Our main goal was to spread education among consumers regarding spirits with a Dutch heritage. In addition of basic technical information, the label also represents our craftmanship ‘‘savoir-faire‘‘. During the seventeenth and eighteenth century the Dutch were trading very large volumes of Old Genever and Batavia Arrack. The 2.50-meter rope around the neck of the bottle should remind you of ships and travel. At the time, barrels full of Batavia Arrack and spices were coming to Europe from Indonesia. In the same way, when the ships were unloaded, we were loading the barrels with Genever to export it around the world.

Perola: You are not a master-distiller, but you are very deeply involved in developing new products. Can you tell us something about developing „new old“ spirits?

Jos: First of all, we encourage everyone involved (distillery, suppliers etc.) to dig deep into the spirits itself and the history behind it. We spend months searching for archives, documents, interviews, anecdotes… We try to understand where that specific spirit is coming from, how it is made and why it is made in such way. The first step of creating a new spirit with a Dutch heritage is digging into History. The second step is to find out the best recipe. The secret is to combine forces and do our best to transmit to the market what we have learned for months: The identity of the product, the history behind the product, and how to drink the product.

Perola: „How to drink the product?”, as you say, is a very good point. You have spirits especially Genever and Batavia Arrack, which are present in lots of old recipes, but it have disappeared for ages from the bar. How did you make bartenders rediscover the products and use them in their recipe? Is mixability an important point for you while creating the product?

Jos: Creating cocktails and mixing the product plays a very important role for us. We believe that bartenders are consumers and have an intimate relationship with the final customers. For that reason, our product must be suitable for making cocktails. As an example, when we were creating the blend of the Batavia Arrack, we were looking for the ultimate balance between the blend and the ABV. We ended up with 48% ABV. We wanted to create a product that gives the bartender the tool to reveal a specific identity to their drink. A good cocktail based on Batavia Arrack makes you travel to Asia.

Perola: What about the next step? We have discovered during BCB that you are working on a new version of your Batavia Arrack. Can we also expect a new version of the By the Dutch Dry Gin or the Genever?

Jos: Not yet. We might do it in the future, but not for the moment.

Perola: What about korenwijn or young genever on a near future?

Jos: Maybe in the future… if we ever release it, it certainly will be on limited editions.

Perola: While having a close look at the Dutch heritage, we can notice some herb liqueurs, similar to the one we have in Germany. We can also identify liquorice spirits. Would you release some of those exotic spirits in the future?

Perola: Final question: What was the best drink you ever had with one of your products?

Jos: One of my best drinks was at the Green Door in Berlin. It was a punch made with our Batavia Arrack. What I love about Robbert’s recipe (head bartender of the Green Door) is the balance in between the Batavia Arrack and the other ingredients. The recipe is the following:

“By the Dutch” – Batavia Punch – by Robbert de Wildt 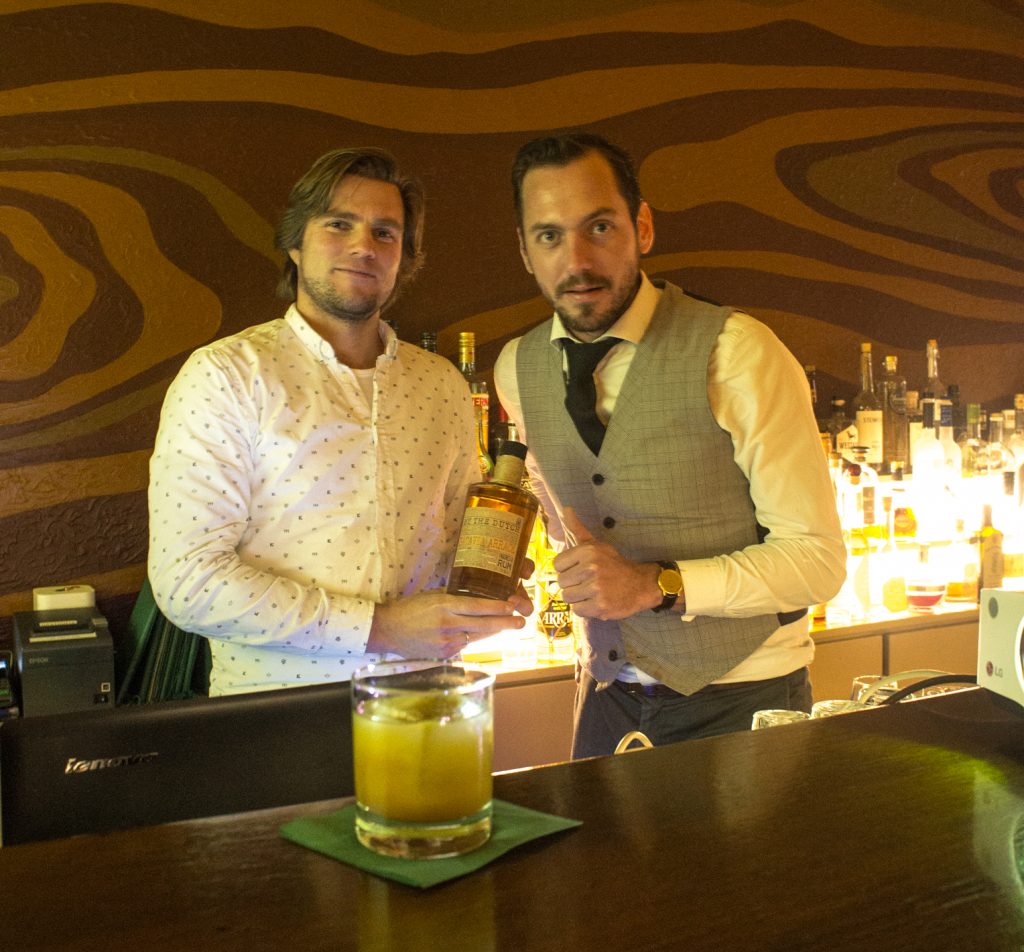 It is known that the first punches where served on Arrack a.ka. Arrach a.ka. Arrak a.ka. ‘Rak base mainly combined with Lime and/or Oleo Saccharum and a loaf of palm sugar such as Gula Jawa. Later on sailors from Europe might substitute the Arrack for other spirits, but the spirit of Arrack is undeniably intertwined with the punch.

My take on this is slightly more complicated but the focus remains on South East Asia. Therefore I wanted to combine Arrack with Tea, Tamarind, and Ginger. Somehow it didn’t seem to work until By the Dutch sailed by.

Before you get started a few notes

The Oolong Tea is important; I’m using a Taiwanese light roasted tea grown at the higher mountaintops. Brew 3 grams at 80°Celsius. Let it sit for about 5 minutes; it has a light amber color and should give you a fruity aroma with hints of apricot and red berries.

The ginger syrup is home made; 500 grams of peeled ginger; sliced and diced. Add 250 ml of water, 1 kg of sugar and one dried Guajillo pepper to spice it. Use a hand blender to fine blend the ginger. When all the sugar is dissolved strain / cool / bottle. Use the left over ginger paste to make some ginger cookies you can serve on the side.

For the Tamarind Chutney I’ve added a ready to go cooking chutney that is already blended to a smooth paste. Depending on the brand you use (our recipe you’re making) the sourness should be adapted; therefore the optional extra lime juice.

The Oleo Saccharum is relatively easy; use the zest (as thin as possible) and muddle with sugar to extract oil. However use a palm sugar such as Gula Jawa to add a somewhat fuller but still fresh mouth feel to the drink as a whole. For one glass, you’d need two or three zests depending on the size and skin of your lemon. Yes, a washed bio lemon without any pesticides and a happy life behind it is better..

Serve in a glass, over one big ice cube for less melting water. Garnish with a slice of lime, some fresh grated nutmeg on top.